Having recently participated in a Radio 4 documentary entitled “How to have a good death” and during preparations for yet another lecture about the media debate surrounding end of life care I’ve been pondering the somewhat abstract concept of a good death a great deal.

I was looking after a patient last week who was dying. His family were fully aware he was dying and when we came to discuss preferences regarding place of care they were very happy with the idea of him dying in the hospital “where he could be looked after properly”. I looked after a lady a few months ago who was also dying. Her husband had initially been adamant that he wanted to take her home to die and that had been her expressed preference when she had been able to communicate. However, her deterioration was fairly rapid and unfortunately it was not possible to facilitate her discharge in time. She went on to develop a problem with respiratory secretions which was identified early and treated effectively with a hyoscine syringe driver. Her husband commented that the care delivered in hospital was much more immediate and that he would have envisaged waiting a little while for that distressing symptom to be dealt with if they were at home. When I was doing my Palliative Care training I met many patients who had ambitions to die in the hospice. They felt this was the environment that appeared to offer the most support to both them and their families.

I do not want to die in either a hospital or a hospice. I would like to die at home in an environment that smells familiar, with familiar things around me and the ones I love nearby. But my experience as a clinician teaches me that we are not all the same and the concept of a good death means very different things to different people. We were having a lively debate in our Clinical Governance meeting this week regarding end of life care and the AMBER care bundle came up as a topic of conversation, especially with reference to Advance Care Planning. Some of the attendees could not grasp the fact that although many don’t, some patients and their families may want to be admitted to hospital with acute illnesses right up until their final illness. Are we as the healthcare professionals trying to impose our own views of what we feel a good death is onto our patients? I am very careful regarding this, knowing full well that I would be very agitated if someone tried to tell me what they thought my death should be like. I feel it is much more important to facilitate people to make decisions about their future by suggesting the possibilities and exploring their views without reference to our own beliefs.

So I’m clear in my own mind where I want to be and who I want to be there, but what else constitutes a good death for me? Symptom control is vital and perhaps my greatest fears regarding dying revolve around this and the possibility of me developing a bowel obstruction at the end of life. I remember vividly a patient when I was an F1 doctor who had a bowel cancer that caused an obstruction who died vomiting. It was horrendous. I cannot erase this memory, but I am going to have to do my best to push it to the back of my mind. I have confidence in the Specialist Palliative Care Team and their ability to treat my symptoms should I need them.

The good death concept has been researched quite extensively in the palliative care literature. Phrases such as “affirmation of the whole person” and “clear decisions and participation” come up time and again. Some of my most important ambitions for a good death are a little softer however. For example I have chosen which music I would like to listen to near the end of life; I’ve even made a few CDs of songs and pieces in preparation. I would like aromatherapy candles to be burning and I want Mum to read to me like she used to when we were kids. We have recently been picking out some books for this task including The Hobbit and The Darling Buds of May. These creature comforts in my vision for a good death create a homely, comforting, warm and peaceful environment that is not scary for either me or my family.

So what is your idea of a good death? It may be very different from the person sat next to you… 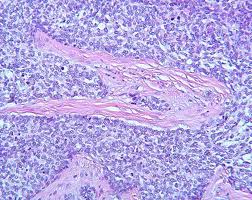 I’ve been fascinated by cell biology ever since I was a little girl. As I progressed through education the sheer wonder and complexities of how this tiny building block of life works has never failed to amaze me and fuelled my desire to learn and understand more. I remember vividly the first time I saw a cell under a light microscope. I was 10. We were looking at onions! I was utterly mesmerised. The concept of electron microscopy was introduced later and we were shown pictures and diagrams of the inside of cells and all the organelles doing their part to help. Mitosis is a beautiful process when you watch it happen. But it is hardly surprising that such a complicated process goes wrong sometimes…

So when I was diagnosed with cancer soon after the initial shock had worn off I was very keen to understand something about the biology of my own cancer. Literature was fairly scarce on such a rare tumour but there were papers out there which I got hold of. DSRCT is caused by a translocation – one piece of a chromosome 11 is swapped with another piece from chromosome 22. This means the cell has dodgy instructions and produces an abnormal protein. This protein is thought to have several roles in promoting tumour growth, which are not fully understood yet. Interestingly my cancer was only formally recognised as a separate disease entity in 1989, meaning I am older than it!

On our DSRCT Facebook page there are several patients and parents of patients who post regularly about how they are going about “beating the tumour” or “conquering the beast” afraid “to give up the fight”. The treatments in the US are particularly barbaric with multiple intensive chemotherapy sessions, frequent surgery, radiotherapy and trials of newer treatments. It is as though people are expressing their anger and grief about the situation by blaming the cancer itself. I find this hard to do myself. This is going to sound really strange but I quite admire my cancer. It’s a clever entity that has fooled my body conning the usual systems that living organisms have to suppress tumour growth. When I look at histology slides of DSRCT I cannot help feeling it is somehow beautiful. Maybe I’m just weird!

However it does raise the point that cancers originate from within us as human beings and therefore by referring to them as evil do we think as ourselves as evil? I think not. I think of my cancer as a part of me and it is unfortunate it has happened to me at a young age, but I cannot change this so acceptance and living as well as I can for as long as I can is definitely going to be my game plan, rather than waging a holy war…